You are here:
Estimated reading time: 3 min
In this article

In reef keeping, the single most important factor that can make or break a tank is without a doubt Alkalinity. This parameter plays a major role in the proper growth and development of your coral.

Why?
This happens because corals consume Alkalinity 24 hours a day with the highest consumption rate happening during your tank’s photoperiod. After the lights turn OFF for the day, the corals continue consuming ALK, but in lesser amounts. Despite lower consumption at night, ALK is continuously being used up.

It is also worth noting that although corals are the primary consumers of ALK, other factors that typically influence consumption rates include salinity stability, bacteria health, trace element content/stability, etc.

With all these variables constantly changing, the step towards ALK stability begins with an automated supply system. Here’s where dosing pumps and calcium reactors come in…

Thanks to dosing pumps and calcium reactors, hobbyists have been able to partially meet the fluctuating ALK demands of their reef tank. Despite each device having their own set of differences, both share similarities in that each can provide a steady supply of ALK over the course of the day. The more stable your ALK becomes the greater the chance of seeing faster, consistent coral growth and improved coloration.

For many years now automated dosing systems such as dosing pumps and calcium reactors have helped reefers gain control over their daily KH swings. With dosing pumps, each dose allows for a slight bump in KH. Shortly after that dose, KH begins its decline until the next scheduled dose. When that dose happens, another bump occurs.

Although this repeating pattern allows for a more stabilized ALK swing, it does not take into account the parts of the day when ALK consumption is lower or higher. If consumption is lower and the KH supplement amount remains the same, it gives way for excess ALK being added to the tank.

In another scenario, as corals continue to grow, ALK consumption rates go up thereby causing the tank to need even more KH supplement.

Existing dosing pumps and calcium reactors cannot track these changes and adjust itself unless you use the GHL KH Director.

ALK stabilization with the KH Director

The KH Director is our take on a KH control system. The KH Director is a testing station that works alongside a GHL Doser 2.1 to monitor and control your Alkalinity. As each test occurs, the KHD accurately tests and provides an Alkalinity result. Based on the outcome of each result, the KHD automatically determines if it needs to adjust your existing dose schedule, calcium reactor or kalkwasser reactor control.

The KH Director essentially controls over and/or under-dosing which helps minimize daily ALK swings. If the KHD finds that ALK is too high, it can automatically reduce your existing dosage to prevent ALK from rising too high. If ALK is too low, KHD will increase the next dosages to slowly increase ALK to the desired value.

When we use the word “stable”, we are not implying that your Alkalinity must remain at a single number at all times. If you can get it to say at a fixed value each day, great!
The key here is to minimize the low-high daily ALK swings that occur every day.

For example, if we had a reef tank that undergoes daily 0.6°dkH swings (8.0 – 8.6) and a tank that has less than a 0.4°dkH daily swing, the first tank may have a harder time achieving consistent growth due to the large fluctuations. The latter will be the tank that shows better coral response due to having a tighter low-high ALK swing. 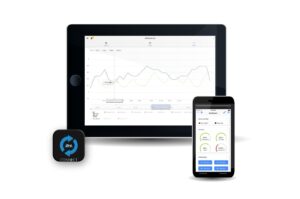 As each KH test occurs, the KH Director will log the result of each test which can be later viewed at any time via the app, cloud, or GCC.

With the KH Director you can test as little as 1x per day, up to 24x per day. The more tests you do, the tighter the ALK control you can achieve

With the KH Director, you have the option to choose from 4 different KH control options. Each option can be tailored to meet your specific needs. The options are:

The KH Director® is largely maintenance-free. We recommend to clean the device from dust and other contaminants from time to time.

Due to the maintenance-friendly design, all wear parts can be easily replaced by yourself, all wearing parts (Tubes, pumps and motors) are available as accessories.

Find more about features and configurations of the KH Director here.