My passion for this hobby began when I was 15 years old. I started a smaller freshwater aquarium that had a mix of tropical fish and artificial plants.
In the following years, I dedicated myself to tropical aquariums, improving my knowledge while also improving upon my systems. I learned a lot over the years and had a lot of fun watching the fish thrive and reproduce.

Particularly fish such as Angelfish, Discus, and African Cichlids. 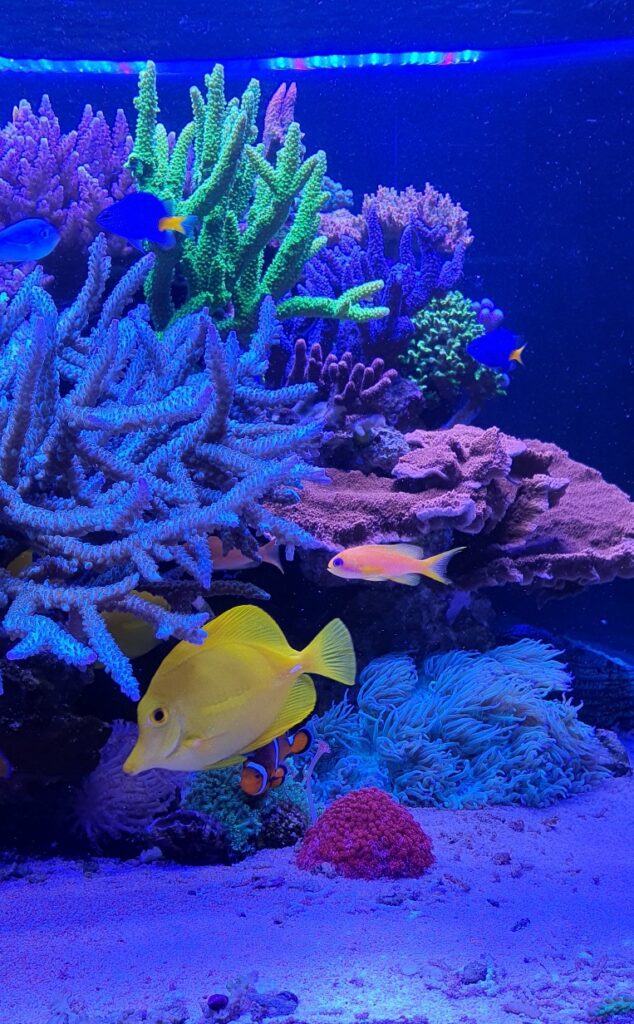 When I was 20 I set up my first salt water aquarium. Unfortunately, the results were not exciting due in large part to the lack of information and knowledge available for a beginner back then. While it was a small aquarium by my standards (150 liters), I had a pair of ocellaris clownfish, some chrysiptera damselfish and some soft corals.

All of which were enough to create a passion or saltwater aquariums that I have never abandoned.

The real turning point for me was the internet. Particularly reef aquarium related forums and the opportunity to meet people both near and far while learning from people with more experience. It really helped me to understand the intricacies of this hobby, avoid mistakes and improve upon my abilities.

My first really successful marine tank was a 100x60x60 cm 360 liter (95 gallon) system, illuminated with 2 lumenark 250w HQI lamps. It had a calcium reactor, protein skimmer and was set up based on the Berlin method. I have never been a fan of all the little bottles associated with some of the popular dosing methods though as I like to enjoy the hobby while not being a slave to it. This was in fact the one and only experience with the Berlin method.

In 2012 we moved to a new house. While I had lots of ideas, I had to be thrifty with my money due to all the expenses that came with the new home. Since I could not be without a saltwater setup and had to go bigger, I acquired up a used 130x 60 x60 cm tank from a friend and set it up in the lower level of my house. It was built in with the front viewable pane visible from the living room while everything else was in the fish room. This was great because it kept the humidity and smell out of the rest of the house.

In 2017 I decided to take things to the next level which brings me to where I am today. I decided I wanted to go much bigger and better. The new tank would be 140cm x 90cm x 75 cm tall (55” x 35” x 29”. The size of the new tank required it to be built and assembled in the house since there was no way to bring in a preassembled tank of that size into my house.  I entrusted my good friend Andrea Centonze of Arteacquatek in Italy to make my dreams a reality. He is an incredible craftsman who is always able to understand the customer’s needs and implement them the right way.

This tank is positioned flush with the wall. It has a removable teak wood frame around it set up like a picture frame. There is a 70cm overflow spanning one side of the tank maximizing the effects of the overflow.

I had the sump made based on my needs, and instead of having it made out of acrylic, I chose to have it made out of Forex, which is a type of PVC. I run a Sicce SDC 7.0 return pump and an Ultrareef Akula 180 protein skimmer. 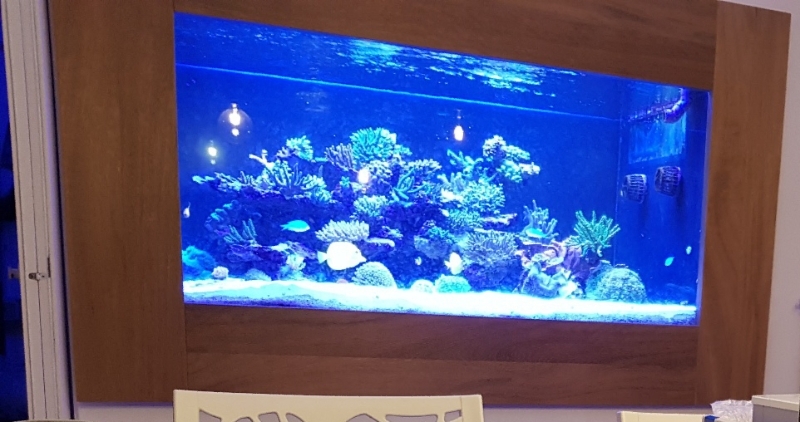 For circulation in the tank, I am running 4 Ecotech Marine Vortech MP40QD’s. To handle the cooling of the tank, I use a Teco Chiller, and for making my water, I have an RODI system which I assembled based on my needs.

I initially purchased the ProfiLux 4 ULTIMATE SET to which I added the following additions:

I use the Maxi doser for my automatic water changes. It performs a 10 liter per day change of water. The GHL Doser 2.1s are used for the balling method and also feeding the corals. At night I dose phytoplankton and diluted liquid food for the corals. For my automatic top off, I use my GHL level sensor to control an Askoll NJ2300. When the ProfiLux detects the level change in my sump, the Askoll turns on to replace any water that has evaporated.

I’ve always been a big fan of Deep Sand Beds (DSB) and have used them in all of my most recent tanks. One of the big issues I always ran into with the DSB’s was internal flow. I like having lots of internal flow but the powerheads always blew the sand around. This is where the GHL Ecotech Vortech controller was instrumental. It allowed me to fine tune the flow from my Vortechs such that I could maximize the flow without disturbing my DSB. Best of all was that I could do it from the ProfiLux interface.

The possibilities of control and management that the GHL system offers are truly unlimited.

Between the control of all my equipment, the dosing, the notifications along with the dedicated app and many other things that the ProfiLux brings to the table are all things that make this hobby easier and less worrisome for me.

Best of all, it affords me more time to enjoy my tank and life without being a slave to it and or worrying about things that I would have otherwise had to do manually.

I want to take this opportunity to thank the GHL team for the excellent products they have created.

I would also like to take this opportunity to thank the GHL team for the excellent products they have developed to make life with aquarium easier.

I look forward to the release of ION Director and other new products like the automatic feeder. Both of which will raise the bar for GHL even more! I also want to thank the GHL forum members and other users who have helped me along the way!

There are 50 and more fish including: